Book Review #42: A Darling in your Fifties 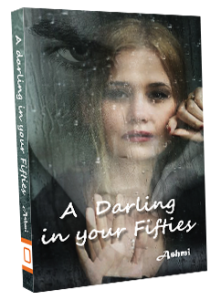 Name: A Darling in your Fifties
Author: Ashmi
No. of Pages: 270
Genre: Fiction
Publisher: BecomeShakespeare.com
Price: Rs. 300/-
Published in: 2016

How did I get it? From the publisher.

The blurb of the book says:
Arjun has disowned his wife, Neema. She has grown to hate her tormentor, her husband, yet knows a divorced woman in India is a scandal and she is trapped. With a malicious mother on the other end, she has nowhere to go. When Arjun, aided and abetted by his mother in law, escalates his attempts to eliminate Neema, she holds her peace, sinks into the fantasy of Bollywood movies, and later empowered by the return of her long-lost friends finds the strength to go in search of a new life.

ABOUT THE AUTHOR:
Nagalakshmi M G., also known as Ashmi is a writer, educator, and counselor. After having worked as a lecturer in English for over twenty five years in Bangalore, she took voluntary retirement in the year 2001 to pursue her passion for writing. She did her Bachelor of Arts from Kerala University and pursued a Master’s degree in English language and Literature at Jnana Bharathi (Bangalore University). Additionally, she has a Degree in M.Phil, and also went on to fulfil her dream of getting a Post Graduate Diploma in Journalism and in ‘Proficiency in Counselling’ from Bharatiya Vidya Bhawan and The Theological College respectively. She has published light reads in Femina and The Indian Express. ‘A Darling in Your fifties’ is her first work of fiction. Although a staunch Bangalorean, she currently lives in Pune with her family.

MY THOUGHTS:
Cover: It depicts a pretty middle-aged woman, super-imposed by an image of devilish man.

Writing: The language was poetic and soothing. The way the author has played with words is beautiful.

Plot: A pretty young woman, Neema, is trapped in a loveless marriage. Unable to walk out of it thinking of her young daughter. Sadly, she had been pushed into this unfortunate situation by her own mother.

The story reflects the belief of our society that a woman without a husband cannot survive; that the value of a father's name attached to a child, even if his existence is meaningless, is priceless compared to a hardworking and selfless mother. It reflects the fears of women trapped in loveless and abusive marriages and why they are unable to walk away.

A jealous mother who goes to lengths to ensure the unhappiness of her own daughter. Neema spends her life wondering why her husband doesn't care for her. Both her mother and husband were confident that she would walk out of the marriage, but Neema could not do it for the sake of her daughter, Goldie. When Goldie is all grown up, Neema's friends return to her life unexpectedly. By then, her husband was planning to eliminate her for good.

I liked the plot but a little disappointed that Goldie did not act in a matured way, helping her mother to gain confidence to walk out of a unhappy marriage and leave her life on her own terms. Another surprising point was that Neema and Goldie never seemed to have dinner. Neema would come back from work, have coffee and go to sleep. Goldie would come back from school and later college, and it would be bedtime.

Nonetheless, I enjoyed the writing and overall story.