Read Review: The Vine of Desire 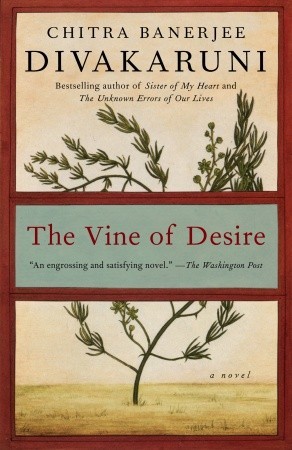 Blurb:
The beloved characters of Chitra Banerjee Divakaruni’s bestselling novel Sister of My Heart are reunited in this powerful narrative that challenges the emotional bond between two lifelong friends, as the husband of one becomes dangerously attracted to the other.

Anju and Sudha formed an astounding, almost psychic connection during their childhood in India. When Anju invites Sudha, a single mother in Calcutta, to come live with her and her husband, Sunil, in California, Sudha foolishly accepts, knowing full well that Sunil has long desired her. As Sunil’s attraction rises to the surface, the trio must struggle to make sense of the freedoms of America–and of the ties that bind them to India and to one another.

Anju had planned to bring Sudha and Dayita to America to give them a new life. But she lost Prem, she needed Sudha for herself. But Sunil in such close proximity with Sudha spells disaster. On the other hand, Ashok wants to marry Sudha. Then Sudha meets Lalit in America. In new premises, equation between the two sisters change forever, affecting other lives as well.

I liked Anju more and so was really disappointed when she was not given a voice. However, writing of the author is amazing as ever. The way she molds and depicts her characters is enchanting. Reading her work is truly a delight. If you want to what happens to Anju and Sudha, you have to read this one.