Read Review: Dying To Be Me 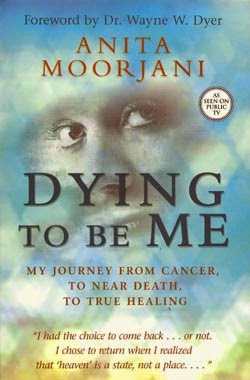 Dying To Be Me:My Journey from Cancer, to Near Death, to True Healing by Anita Moorjani
Paperback, 191 pages
Published in 2012 by Hay House

Blurb: In this truly inspirational memoir, Anita Moorjani relates how, after fighting cancer for almost four years, her body—overwhelmed by the malignant cells spreading throughout her system—began shutting down. As her organs failed, she entered into an extraordinary near-death experience where she realized her inherent worth . . . and the actual cause of her disease. Upon regaining consciousness, Anita found that her condition had improved so rapidly that she was able to be released from the hospital within weeks . . . without a trace of cancer in her body!

Within these pages, Anita recounts stories of her childhood in Hong Kong, her challenge to establish her career and find true love, as well as how she eventually ended up in that hospital bed where she defied all medical knowledge.

As part of a traditional Hindu family residing in a largely Chinese and British society, she had been pushed and pulled by cultural and religious customs since she had been a little girl. After years of struggling to forge her own path while trying to meet everyone else’s expectations, she had the realization, as a result of her epiphany on the other side, that she had the power to heal herself . . . and that there are miracles in the Universe that she had never even imagined.

In Dying to Be Me, Anita freely shares all she has learned about illness, healing, fear, “being love,” and the true magnificence of each and every human being!

This is a book that definitely makes the case that we
are spiritual beings having a human experience . . . and that we are all One!

My Thoughts:
This is a difficult book to  review. I have always been curious and mystified by NDEs (Near Death Experience). I browsed through several books on the topic and decided to pick this one. The author who was suffering from terminal cancer had a NDE and when she revived her cancer was miraculously gone, all of it. She has put her experience, realizations and message in this book.

The author has described her NDE as vividly as written words allow. She maintains that each one of us is a thread in the universal cosmic tapestry. That each of us is a magnificent creature whose actions makes up the ultimate picture in this tapestry. She says that it was her negative energy that caused her illness. And when her experience of NDE converted her entire being into positivity, the cancer vanished.

The book gives courage to those who fear death as well as the difficulties in life. It is thoroughly spiritual and no emphasis is given on religion. I have seen critics expressing mismatch between the author's experience and religious belief. I have read and heard about other NDEs which vary from the author's narrative, and involves heaven and God. I believe God shows whatever He wants to. But like NDEs, this narrative also tells us that there is greater force at work and there is a much larger purpose to our existence.

At times, the narration becomes a little monotonous. But that is understandable as NDE is a huge concept and experience to be expressed in words. I have drawn several amazing things from the book to my life, like if I am okay, everything else around me will be okay and vice-versa.

I would like to recommend this book to those have a bent towards spirituality, those who fear death or life and anyone who wants to know about a NDE. This is definitely a book for keeps.