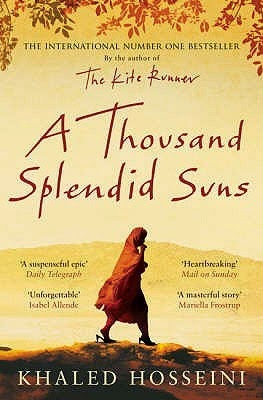 
My rating: 5 of 5 stars
Blurb: Mariam is only fifteen when she is sent to Kabul to marry Rasheed. Nearly two decades later, a friendship grows between Mariam and a local teenager, Laila, as strong as the ties between mother and daughter. When the Taliban take over, life becomes a desperate struggle against starvation, brutality and fear. Yet love can move people to act in unexpected ways, and lead them to overcome the most daunting obstacles with startling heroism.
I am already A Khaled Hosseini fan and this book too did not let me down. The plot of this book, like the author's other two books, is based in Afghanistan. The storyline spans over a period of 30 years, and it takes the reader through what Afghanistan was and what it has become.

The story is of Mariam and Laila. Mariam, whose life is defined by the illegitimacy of her birth, finally finds a legitimate meaning to it. Laila's, with dreams of young love and aspirations, is shattered by her country's violence, and becomes an adult overnight. Both of their lives and fates are intertwined, but with their strength of their endurance.
"She remembered Nana saying once that each snowflake was a sigh heaved by an aggrieved woman somewhere in the world. That all the sighs drifted up the sky, gathered into clouds, then broke into tiny pieces that fell silently on the people below. As a reminder of how people like us suffer, she'd said."
"Learn this now and learn this well. Like a compass facing north, a man's accusing finger always finds a woman. Always."
This story is obviously about the struggles and strength of women.