A couple of months back, I was contacted by one gentleman from Leadstart Publishing Pvt. Ltd. I was elated when he wrote that they would like to send me their books to be reviewed. A few days back, I was on cloud nine to receive four titles from them at my doorstep. The titles are:
I decided to start with Marry Go Round. And here's my review. 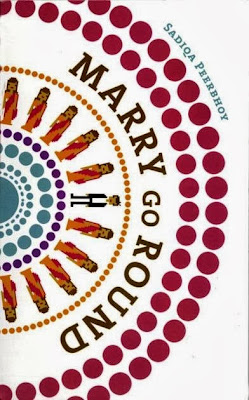 The blurb of the book says: A determined mother using blatant emotional blackmail to inveigle her NRI son into a marriage with the right sort of desi girl; a reluctant groom with a live-in girlfriend following him all the way to India; a bride on the rebound from a disastrous liaison with a married man; skeletons rattling in old family cupboards; an aunt on the vengeance trail ? and we have a heady cocktail of an arranged wedding that morphs into a love marriage with quite the wrongest possible girl?with a little tactical help from long-dead ancestors. Written in a refreshingly original style, Marry Go Round is one quaint combine of today?s merrily irreverent humour and a staid Hyderabadi milieu with its Nawabi hangover from grandiose times long past.

About the author: Sadiqa Peerbhoy is a literature graduate from Elphinstone College, Mumbai, Sadiqa Peerbhoy did an MA in Journalism and a post graduate course in Creative Writing from The New School, New York. She has been an advertising professional all her working life and the creative force behind many a brand launch and its continuing success. Sadiqa started freelancing to maintain her sanity in a high-stress job and has since written and published several hundred short stories in leading magazines and Sunday papers. She has been a columnist for Deccan Herald, Newstime, Midday, The Brief, and the Times of India, Bangalore. Her long-running, topical humour column, Swalpa Connect Maadi in Deccan Herald has a devoted following in Bangalore. She has scripted two popular serials for national television: Honee Anhonee and Sara Jahan Hamara. She has also written documentary scripts for BBC World. Two of her short story collections have been published. Her third book, ‘But Other Mothers Do’, is a hilarious take on the trials and tribulations of a young working mother. Adding further to her eminent record of versatility, Sadiqa has set up and run a British affiliated college in India for specialised studies in advertising, marketing and graphic design: The Wigan & Leigh College in Bangalore. Her academic pursuits also include a visiting lecturership on Creativity and Advertising at IIM Bangalore, Chitra Kala Parishat and several other colleges. Moreover, as Managing Director of Innergy Skills, a training and placement company, Sadiqa conducts Creativity Workshops for Corporates like HP, ABB among others. She is the mother of two children and a passionate student of Hindustani music. This is her first foray into full length fiction.


STORYLINE:
The story is predominantly about Sartaj Begum, who is a typical Indian soap mother whose sole purpose in life is to get her child married and reproduce. It's a laugh riot how she tricks her NRI son to come home from NY to get him married. He comes down for three weeks and he is to go back with his bride in tow. The plot is based in Hyderabad and the characters are interesting and hilarious with their Hyderabadi nuances.
CENTRAL CHARACTERS:
Sartaj Jehan Begum: She's cent percent drama and hence spells entertainment. She still lives in the hangover of the grandeur of old jagir days. To her Shakespeare is the demented Sheikh Peer and democratic is damocratiking. When she has her mind up to something, nobody can stop her.
Professor Shujat Ali: The husband of Sartaj.He is a retired English professor who never fails to quote Shakespeare, whether it suits the situation or not. Food is the love of his life (other than Shakespeare) and his wife believes there is a shaitaan resident in his stomach. And he does not dare to go against his wife.
Riaz: The NRI son and only child of Sartaj. A typical son who came to visit his parents only once in eight years. He is the stud in Manhattan where ladies throw themselves at him. He has a drummer in him who starts drumming in all situations. Strangely he falls in and out of love pretty fast. Of course the degrees of his love are different for different women.
Dilawar: The cousin and friend of Riaz and also his partner in crime. However, he is easily bribed by Sartaj with her delicious halwa to help in tricking Riaz to come home.
Sana: The first prospective bride for Riaz who has her own story. She is a headstrong, liberal minded and confident woman.
Dr. Meera:  The final bride. Turns out to be Riaz's dreamgirl.

WHAT I FEEL:
I liked the writing style. It was witty to the bone. Here a few lines:

The book is fully of humorous similes. Here are a couple of them:

The story goes on fine, making you laugh even in sad situations. The crazy relatives, the greedy matchmaker, the families showing off, scandals...everyone and everything has a good comic timing. But the story takes an unexpected twist on the 176th page when the final bride makes her entry. I felt this twist was unnecessary. Sana and Meera could have been the same girl. Riaz could have pursued Sana and she could have been his dream girl with the beautiful green eyes. Strangely his description  of his dream girl comes at the end and after he sees Meera. Also the ending with the deceased Naana and Naani watching from their celestial abode could have been done without.

Of course, I loved the book till the 175th page and many portions kept me laughing till a long time. Like the first chapter where Sartaj goes to meet her friend Saeeda who had just returned after visiting her son's family abroad. Saeeda goes on and on about her grandchildren and Sartaj gets frustrated with irritation plus jealousy. Another is when Sana contemplates suicide and weighs out the different techniques and their cons.

The book is a light read and you can go for it if you are craving for a good laugh. I give Marry Go Round 3.5 on a scale of 5.